Hotels in converted historic buildings are an attraction in their own right, much more than simply being a place to stay. They can offer guests a chance to experience the setting of a bygone era, only with the addition of more modern luxuries.

Yet developers face a balancing act. Not only do they have to make sure that their designs adhere to the latest building regulations, they also have to satisfy requirements from heritage organisations to preserve certain historical features. Historic England plays a key role in this process, scrutinising plans and raising concerns when necessary. It is a non-departmental public body that is sponsored by the UK Government’s Department for Culture, Media and Sport.

“Historic England can help an owner understand why a building is special and how best to accommodate a new hotel use. We encourage the special interest of a building to be understood from the very beginning of a project – a qualified heritage consultant can do this for you,” explains Rachel Fletcher, assistant inspector of historic buildings and areas at Historic England. “We can then work with you and your conservation-accredited architect to ensure the character and history of the building is both celebrated and protected.”

As almost every project is different and has its own quirks, the key is in careful planning. 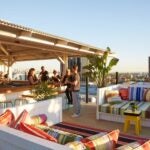 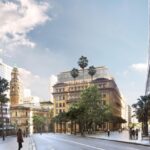 “It involves clever ways of getting around things, a bit of ingenuity and occasionally some lateral thinking. In other words, you avoid a problem by moving it to somewhere you can solve it,” says Richard Griffiths, director of Richard Griffiths Architects (RGA), which specialises in old buildings and worked on redeveloping St Pancras Renaissance Hotel.

“If you can get all of the practical things right, it has a capacity to be far more engaging for people than probably many new buildings do. So, the motivation for me is both revealing the quality of what was there historically and making it work for today and tomorrow,” adds Griffiths.

Mark Vines is project architect at Acanthus Holden. According to him, one of the biggest challenges with converting historic buildings is managing both the aspirations of the client and the requirements from heritage organisations.

“They don’t always match,” he says. “Like working on any building, you have to accept that there are going to be challenges.”

London’s St Pancras Renaissance Hotel is perhaps one of the best-known cases of converting a historic building into modern accommodation.

The building is instantly recognisable for its distinctive gothic towers and turrets. Given how sought after space for development is in the UK capital these days, it is hard to believe that large sections of the building were left practically vacant for more almost 80 years.

Originally opened in 1873, the Midland Grand Hotel, as it was originally known, closed in 1935. What saved it from being demolished was receiving Grade I listed status in 1967 thanks to a campaign led by Sir John Betjeman and Jane Hughes Fawcett.

Although certain sections of the building were used as offices by British Rail until the 1980s, much of it had fallen into a state of disrepair and the structure was a shadow of its former self.

Discussions about redevelopment had been taking place around the mid-1990s. Things started moving when it was announced that St Pancras would become an international rail station, replacing Waterloo as the terminal for Eurostar trains. Planning permission for the hotel redevelopment was granted in 2004.

Renovating the building had its difficulties, with one being that the original hotel only had eight bathrooms. The building also needed to be updated in accordance with the latest fire and safety regulations.

Richard Griffiths Architects designed the public areas and the new wing of the hotel, which was not exactly straightforward.

“The new wing was 170 extra new standard specification hotel bedrooms, double-banked on the corridor. And that was going to produce a building, which was effectively a seven-storey building running along the side of the station. Historic England was extremely unhappy about that and they made the developer spend about a year proving the economic necessity in order to justify having a new wing at all,” explains Griffiths.

“When we took over the design, we found a way of effectively turning a seven-storey building into a three-storey building by taking off a floor from the building and putting it in new mezzanine on the street frontage, which didn’t previously exist. And then we put two storeys in the roof, which was another two storeys lost. And we also had double height arches, which were the scale of Gilbert Scott’s on the Midland Road frontage, which have got two levels of rooms in them. So, it’s a sort of subterfuge, but it’s one that works very well. And they were very happy with it.

“That’s an example of what I would call using some of the clues from the original building to find a way around a modern problem and make it work both functionally, but also visually and historically for Listed building consent.”

Redevelopment is all the more remarkable considering that it was achieved without any public subsidy. The 207-room hotel reopened in 2011 and is owned by Manhattan Loft Corporation and operated by Marriott.

The UK has a rich architectural history, from Victorian warehouses to medieval castles. Many are still standing, some hundreds of years after they were built.

While London is famous for its historic buildings, there are a number of other heritage structures around the UK that have been converted into hotels.

The buildings include a windmill built in 1806, now known as Twr y Felin Hotel; and Penrhiw Priory, a former vicarage built in 1884 that opened as a hotel in 2012.

Yet the group’s oldest building that’s been converted into a hotel is Roch Castle, built around 1180 and a Grade I listed ancient monument. Its heritage is a fundamental part of the guest experience.

“On arrival, we greet each guest at their car to assist with luggage and direct them into the entrance hallway. We do not have a traditional reception desk, but instead provide a full tour and history of the building before checking guests into their rooms, which allows us to ensure that they feel truly at home for their stay. We also offer personalised tours for art, history, nature and archaeology with an experienced knowledgeable guide,” says Verity George-White, Retreats Group acting marketing and events manager.

“Although all aspects of the fabric are listed and cannot be altered, we did have some freedom in the rebuilding. The historical footprint is intact, ensuring the feel of a real castle; whilst the luxurious contemporary interiors guarantee the highest level of modern comfort.”

Converting a historic building into a hotel also allows the structure to generate revenue to pay for its upkeep and aid the long-term preservation.

“Owners and managers gain competitive advantage from being able to offer the special experience of staying in buildings that are rich in history and character. And of course, hotels can be an excellent way to secure the economic future of important, large buildings,” adds Rachel Fletcher from Historic England.

In addition, guests are more likely to have a memorable stay due to the unique setting.

“The appeal of having a different experience rather than a ‘cookie cutter’ hotel stay will likely attract guests and this may help the hotel develop more of a connection with its guests over time,” says Dr Maeve Marmion, head of department in experience economy at Chester Business School.

“There may even be an appeal of something more to ‘write home about’ or more likely to share online with peers and loved ones and this can possibly be a driver for future demand.”

However, according to architect Mark Vines, future developments could suffer due to a drop in heritage funding. “It’s not getting any easier,” he says.

Although, provided that funds are available, the right combination of historical buildings and modern luxuries has been proven to bring in business.