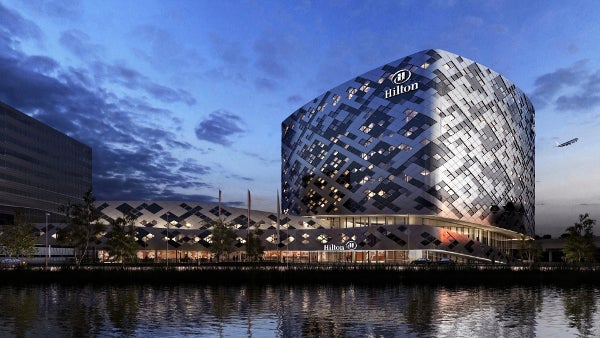 Construction of the new 433-room Hilton Amsterdam Airport Schiphol will start later in 2012.

The hotel is expected to open in 2015 and will replace the current Hilton property at the airport; Hilton said it would manage the facilities at the new Hilton Hotels & Resorts hotel.

The facilities will include a ballroom and 23 meeting rooms, a restaurant and a bar, a spa and fitness centre, a lobby, underground parking with 138 parking spaces and an atrium with a 35m high glass ceiling that will form the heart of the hotel and meeting area.

The hotel will join the recently opened Hilton Frankfurt Airport and Hilton London Heathrow Airport Terminal 5 as the latest addition to Hilton Worldwide’s collection of airport hotels in Europe.

Recently, Hilton Worldwide opened the sixth hotel in its Dutch portfolio, the DoubleTree by Hilton Amsterdam Centraal Station in the Netherlands.

By 2014 Hilton plans to open the first Waldorf Astoria and Hilton Garden Inn properties in the Netherlands.

Browse over 50,000 other reports on our store. Visit GlobalData Store

Lamps and Candleholders from Granite and Marble Designed in Denmark

Lamps and Candleholders from Granite and Marble Designed in Denmark

19 Nov 2020
Registration is disabled.
We use cookies to ensure that we give you the best experience on our website. If you continue to use this site we will assume that you are happy with it.ContinuePrivacy policy