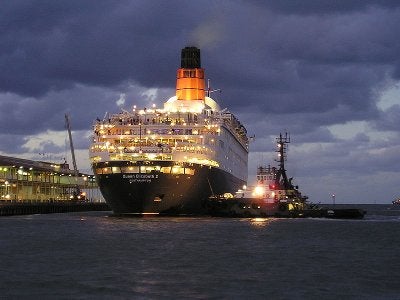 Iconic ocean liner The Queen Elizabeth 2 (QE2) will soon be converted into a five-star floating hotel and will be moored in an Asian harbour.

The proposed luxury hotel will feature 500 rooms and include a shopping mall, restaurants and a maritime museum.

An agreement was signed between Drydocks World, a maritime holding firm of the state-owned Dubai World, and Oceanic Group, a multi-national cruise company, to upgrade the passenger liner, which has been lying idle in a Dubai port for more than four years, into a five-star hotel.

Following the conversion, Drydocks World Dubai will retain the ownership of the cruise liner.

Oceanic Group managing director Daniel Chui said the company will spend millions of dollars on the ship to restore the splendour of its glory days.

The ship is expected to be moored by January 2014 following conversion, to an undisclosed destination, according to Drydocks World.

"The proposed luxury hotel will feature 500 rooms and include a shopping mall, restaurants and a maritime museum."

The Australian reported that a map noted the planned voyage of the ship ending in China, raising speculation that it could be berthed in the ports of Shanghai or Hong Kong.

Oceanic Group noted that the QE2 will feature alongside Asia’s heritage hotels such as the Peninsula Hotel in Hong Kong, the Peace Hotel in Shanghai, the Grand Hotel in Taipei and the Rex Hotel in Ho Chi Minh City.

Although the owners initially planned to keep the 294ft cruise liner in a Dubai port, these plans were later scrapped.

Istithmar World, a state-owned firm headquartered in Dubai, acquired the ship from Cunard for $100m in 2007 and announced its plans to convert it into a 300-room hotel in July 2012, following which it was expected to be berthed in a Dubai port.

However, the government dissolved the board of Istithmar World in 2012 and passed the ownership to Dubai World.

Launched by Queen Elizabeth II in 1967, the vessel made 26 round-the-world voyages since entering into service in 1969.

The vessel undertook its last voyage in late 2008.