Paddy Killen, Derek Quinlan, Bono and the Edge from the rock band U2

Paddy Killen, Derek Quinlan , Bono and the Edge from the rock band U2 (and manager), Dublin City Council, Department of the Environment, An Bord Plean&#225;la

Expand
Part of the new plan will produce the largest spa in Dublin.
The Clarence Hotel is central to Wellington Quay at the edge of the Liffey.
The old study with wood panelling, which will be reused.

The Clarence Hotel has received guests at Wellington Quay, overlooking the Liffey in Dublin, for over 177 years. However the four-star luxury hotel has lost money, as its facilities are small and old fashioned, and there are only 49 rooms.

In mid-2007, a €150m plan was put forward by Belfast property developers Paddy Killen and Derek Quinlan, along with Bono and the Edge from the rock band U2 (who own the hotel and surrounding buildings), to completely redevelop and expand the hotel and surrounding five buildings with modern facilities, retaining the Georgian facades (four Georgian buildings and the Dollard Printing Works). The architects, Foster and Partners, were appointed to design the new 30.6m-high, nine-storey hotel to accommodate 114 bedrooms, 28 suites, a skycatcher atrium, a sky room and an elliptical disc feature on the roof (total floor area of 20,741m²).

Planning permission was granted for the project in July 2007. Dublin City Council passed the plans to allow major changes to the listed buildings involved in their own Liffey Quays Conservation Area.

However the Department of the Environment, Heritage and Local Government objected and invoked a bitter attack on the project that caused much debate and ended in the case being heard at the An Bord Pleanála offices in
Dublin.

“Planning permission was granted for the project in July 2007.”

Dublin City planners maintained that the demolition of the rear aspects of the buildings but preservation of the facades would retain the architectural composition. However the Department of the Environment maintained that the law (Planning and Development Act, 2000) allowed for such demolition of protected structures to be considered only in exceptional circumstances and not in this case.

In support of the project Howley Hayes Architects provided a report maintaining that the project was of considerable architectural merit and should go ahead. In addition Foster and Partners pointed out that many of Europe’s prestigious hotels, such as The Ritz in Paris, are converted historic buildings. On 18 July 2008, An Bord Pleanála upheld Dublin City Council’s decision to grant planning permission despite continuing objections. The hotel reconstruction project will go ahead with revisions to the initial plans.

The project has been delayed for two years and is now expected to be completed in 2012 or 2013. The delay has caused the the hotel to operate as it is for two years. As of November 2009, the project is on hold.

The hotel will include a goods lift from Essex Street East, a 1,360m² spa and pool, conference facilities and service areas below ground level, restaurants, a bar, retail facilities, a hotel reception and service areas at ground level, 142 hotel bedrooms and suites on five floors over ground (six-storey) on Wellington Quay and six floors over ground (seven-storey) on Essex Street East.

“The skycatcher atrium is intended to bring light and natural ventilation .”

The skycatcher atrium is intended to bring light and natural ventilation into the interior from pool level to roof level. The design incorporates a glazed-rooftop bar, restaurant and lounge. The hotel will include balconies overlooking Wellington Quay and Essex Street East, and roof terraces on the seventh and ninth floors. A total of 40 car spaces and 36 bicycle spaces will be provided.

The plans were developed by Foster and Partners, and the architect of record is Costello Murray Beaumont. The landscape consultant is Tíros Resources Ltd and the consulting engineers are Faber Maunsell and JJ Campbell & Associates. The planning consultant is John Spain Associates, and the mechanical and electrical engineers are MacArdle McSweeney Associates. The environmental engineer is AWN Consulting and the archaeologist is Margaret Gowen and Company Ltd. 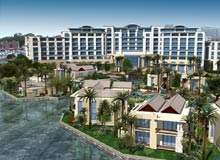 One and Only Luxury Hotel Resort and Spa – Cape Town – South Africa
Topics in this article: