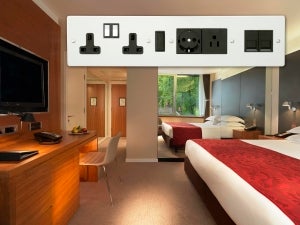 Focus SB electrical accessories have been specified throughout the bedrooms and bathrooms of the 5-star Royal Garden Hotel in London.

The Kensington hotel has been undergoing a refurbishment that has taken three years, with all public areas getting a facelift.
More than 393 bedrooms and bathrooms have had plates installed from the Ambassador range with polished and satin stainless steel finishes. As well as the usual double sockets, shaver sockets with volume control were fitted in the bathrooms, bespoke plates including dimmers, switches and a night light were fitted next to the beds, and door entry card switches and do not disturb signs were installed by the doors.

Jonathan Lowrey, Deputy General Manager of the Royal Garden Hotel, says that they have been more than happy with all aspects of working with Focus SB: "The quality of the plates themselves has been excellent and bearing in mind this project has been ongoing for three years, we have developed an excellent relationship with Focus SB," he says. "Nothing has been too much trouble should we have had any requests!"

The Royal Garden Hotel was originally built in the 1800s under the name of the Palace Hotel. As part of the war effort in the 1900s it was taken over and used as the headquarters for the Woman’s Royal Voluntary Service. In the 1960s, as part of a Labour Government grant, the hotel was demolished and completely rebuilt under the design of Colonel Richard Seiffert. After five years of construction the hotel re-opened in 1965 under the Royal Garden Hotel brand. The Royal Garden Hotel is one of three partner hotels, the other two being the Goodwood Park and the York Hotel in Singapore.

Roger Kemp, Managing Director, is proud to have been involved with another major refurbishment of such a prestigious hotel: "The Royal Garden Hotel is one of the finest in London and it is fantastic to know that Focus SB products have been specified throughout all the rooms and bathrooms," he says. "The hotel will be hosting some significant dignitaries over the celebrations this summer, and it is very pleasing to know that our electrical accessories have gone into transforming the hotel."

More Than Just Your Imagination

To meet the demands of designers and specifiers, Focus SB has launched an app for...

A Peppering of Focus SB Plates Throughout a Cottage

More than 300 lighting plates from the Focus SB range have been specified throughout Peppering...

A shepherd's hut from the Goodlife company fitted out with Focus SB's Deckle Edge slate-finished...