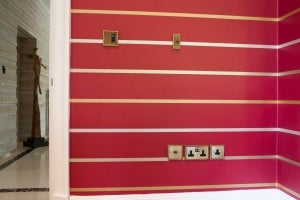 Refurbishing a country house built in 1810 is no mean feat – least of all when it has to be stripped back to bare walls and a supporting structure inserted to ensure that the chimney column does not collapse.

The original structure at Stanmore Hall was built by a gold merchant and further extended in 1860. Some of the designs were thought to be by John Ruskin, the leading English art critic of the Victorian era, also a draughtsman, watercolourist, prominent social thinker and philanthropist.

Bill and Patti Hillyard, the current owners, fell in love with it some 150 years later despite the state of disrepair it had fallen into. Bill, a retired IT consultant, had a vision for the twelve-bedroomed Georgian mansion that included a swimming pool and decadent kitchen with marble selected from a tour of Italy.

As part of their vision for the interior design, they knew that the electrical accessories would play an important part. He approached an electrical wholesaler in nearby Bridgnorth who knew of only one company that would be able to help with the various specials that would be needed – Focus SB – as Bill explains: "We had to plan every room down to the finest minute detail from the very outset. Sockets and switches could have really clashed had they not been considered, but thankfully my wife is a stickler for detail!"

"Focus SB was recommended to us and the service we have received throughout could not have been better. Some of the finishes may have been challenging, but nothing has been too difficult for them to bespoke."

Beyond the twelve bedrooms, each with themes ranging from chocolate to vibrant red, were the billiard room, with its striped burgundy and gold wallpaper, and the slate-walled and marbled-walled kitchen each with their own style of sockets required. All of the lighting control plates have been finished to match the various decors and even the air sampling ducts have been finished in bronze and matt black.

Following a meeting with one of the Focus SB sales managers, Bill opted for the Dorchester range finished in everything from Light and antique Bronze to colour coated Pewter and Antique Silver. "This is no ordinary house and so we didn’t want ordinary finishes," he says. "The electrical accessories not only had to match the vision and design, but were also required to integrate with the Lutron and Sensible Heating technologies.

"Focus SB has been able to deliver everything we asked of them!"

More Than Just Your Imagination

To meet the demands of designers and specifiers, Focus SB has launched an app for...

A Peppering of Focus SB Plates Throughout a Cottage

More than 300 lighting plates from the Focus SB range have been specified throughout Peppering...

A shepherd's hut from the Goodlife company fitted out with Focus SB's Deckle Edge slate-finished...

We use cookies to ensure that we give you the best experience on our website. If you continue to use this site we will assume that you are happy with it.ContinuePrivacy policy

Receive our newsletter Sign up to our e-Newsletter here