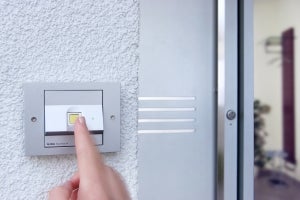 Gira now offers something for building technology that has long been standard in the automotive industry: Keyless access control with modern technology that offers more security and greater comfort, even in single and multi-family houses.

The three Keyless In Fingerprint, Keypad and Transponder variants are new functions within the Gira door communication system. However, they can also be used as individual units.

Using high-frequency technology, this sensor evaluates the structures of the deepest layer of skin of the finger used. The detection of signs of life in the finger is guaranteed with this extremely secure process for keyless entry into buildings – any fingerprints left on the surface scanner cannot be misused by unauthorized persons.

This means the system cannot be outwitted. In addition, the fingerprint scan allows the correct evaluation of the skin surface of slightly injured, soiled or wet fingers and works reliably with skin structures which are difficult to read.

The device is designed ergonomically so that your finger is always comfortable during the scan. Even if it is turned when making contact, the sensor can detect and correct this within a maximum range of ±15 degrees from the zero axis.

The contact surface is easy to find even in the dark, as it is illuminated around the edges with a white LED. The Gira Keyless In Fingerprint is ideal for a single-family and multi-family house with up to 6 residential units, but also for smaller commercial buildings, like a doctor’s office.

The Gira Keyless In Keypad finally puts an end to the unnerving search for a key ring. Because here the door is opened after a specific combination of numbers has been entered. Here, a light touch of the keypad is sufficient, which is followed by audible feedback.

Since this capacitive sensor technology is virtually wear-free, the security of the access control system is increased – there are no signs of wear which could indicate frequently used numbers. The keypad has 16 key fields, and up to 255 codes can be managed with it. Numbers and special characters are evenly backlit via a blue LED and are easy to see at night.

The Gira Keyless In Transponder represents the latest generation of electronic access controls with transponder technology. The unit is based on a long-range transponder that receives the signal of an electronic key, even when it is still up to 1.5 metres or optionally 0.75 metres away from the reader.

Since the battery-operated transponder key transmits a signal automatically as soon as it detects the reader, it does not actually have to be held in front of the field, but can simply remain in your pocket. If this is undesired due to security reasons, the Gira Keyless In Transponder can be changed over to a short-range function. Operation is absolutely wear-free since there is no direct contact. The reader can manage up to 250 transponder keys. They each possess a different code and are thus unique.

The three Gira Keyless In products can be integrated into the Gira door communication system without the having to add additional system components. They can also be realised as individual devices, without additional control components. The latter should not be installed in safety-relevant areas.

In contrast, a high level of security is ensured in connection with the Gira door communication system, as the switching action takes place bus controlled in the switching actuator which is installed protected from unauthorized access. The Fingerprint, Keypad and Transponder integrate into the Gira switch range both outdoors and indoors. They are available for TX_44, Standard 55, E2, Event, Esprit, E22 and the new Gira F100 range.

Gira to Present at 100% Design in London, UK

Gira has released its July newsletter, with highlights of the company's latest achievements and product...

Intelligent building management is ensured throughout the entire hotel complex with the Gira Instabus KNX/EIB...

Especially for commercial buildings, the representative effect of the area surrounding the building plays a...